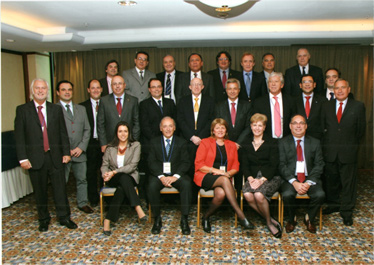 During the Meeting, there was a Presentation by Ricardo Sánchez, Senior Economic Affairs Officer from the Economic Commission for Latin America on the “AMERICAN PORTS CHALLENGE FACING THE CHANGE IN VESSELS DIMENSIONS”, in the presence of representatives of the shipping industry in Uruguay.

During the development of the Meeting, issues related to the institutional activity of CIANAM were dealt with. The foreign trade and its impact on port and maritime transport in the region was analysed as well as the institutional activity regarding the relation with governmental authorities, which tend to simplify this activity and all the efforts made in training and quality management in order to reach the best goals of management and efficiency.

In this opportunity, we analysed different mechanisms for trade simplification, capable of coexisting with due control and security measures, which should be kept in international trade, specially in customs administration in relation with control and simplification in order to prevent delays and extracosts. Therefore, it is encouraged the use of proceedings in the analysis and identification of risks, inspection and electronic audits, which shall allow Customs to perform better controls avoiding intrusive inspections and delays that affect operations.